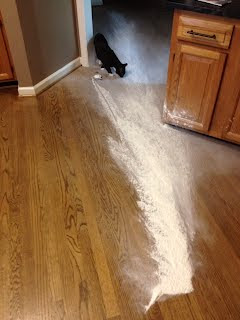 A couple of pounds of flour on the floor. Someone didn't put the top on the flour canister tightly.

So that was fun. I hope I enjoy the rhubarb pie when it's finished.

Until then, you'll find me vacuuming and washing the floor and tracking Baxter through the house...

Posted by knittergran at 4:52 PM 2 comments:

What can I say? I love weird, corny, odd, funny signs. I'm just back from Austin, TX where I saw these: 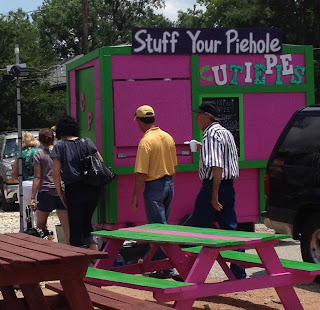 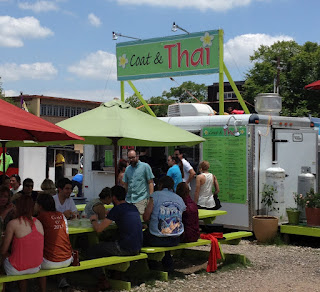 Um... A hair studio? I get the Cut but the Shoot? My daughter suggested that they take pictures of the haircuts, but this IS Texas, so something else may be going on. Think .....shooting range out back???

And what does a stag have to do with Catholic supplies? Or tile? 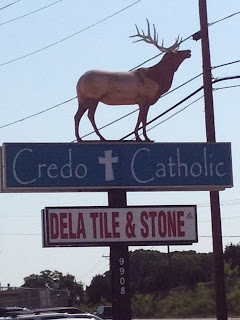 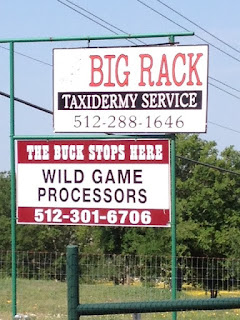 I did NOT take a picture of the three vultures devouring a newly car-hit deer alongside the road.

Lily's dance recital was on Saturday and I was there----it was a lovely event, Lily danced perfectly and then received these beautiful flowers from her many fans. 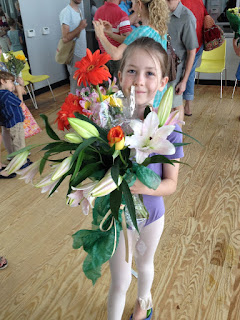 My last night in Austin I was accompanied by one of these creatures on my walk down the hall to the bedroom, only the one I met was much LARGER and much SCARIER than this one. Really!!! 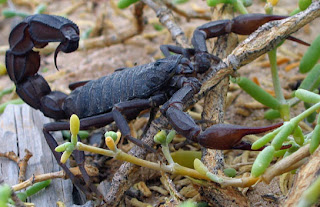 I shouted for my sister (who wasn't even there---weird) and then when she didn't immediately show up, for my daughter. My son-in-law and oldest granddaughter showed up first. My granddaughter shouted: Don't kill it!!!

WHAT??? Kill it ten times over, I say. Then put it down the garbage disposal. Ten times.

But instead, my daughter trapped it under a glass, and my granddaughter and son-in-law slid a piece of paper under the glass and scorpion and took it outside to set it free, where it probably did a U-turn and headed back for the house where its thousands of babies still live.

I'm back in Atlanta, where there are no scorpions. I think.
Posted by knittergran at 10:58 AM 2 comments: 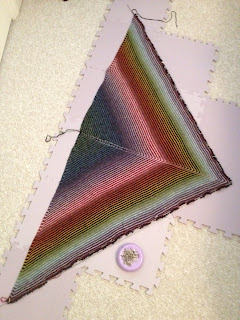 Finished. I had planned to use all of the yarn on the skeins, but got tired of the thing before that happened. So I have yarn left over and I will take it to Austin with me to see what I can get the older girls to weave on their loom.

I did a picot bind off to make the process more creative and less boring, but the less boring part didn't happen. And yes, I could have put pins in each of the little points of the picot, but I didn't want to love the frilly edges.

Now on to the rest of the Hip in Hemp skirt I started over a year ago. I put it on a 60" cord and put the elastic in the waist and discovered that it fits!!! I see a light at the end of the tunnel on this project and I don't think it's the train coming at me. I think it's a nearly finished skirt...and it's about time. And I think it's going to be beautiful. Fingers crossed.
Posted by knittergran at 10:21 PM No comments:

I am actually knitting something that is NOT:

a scarf
a shawl
a shawlette
a hat
socks


Scarf not included.  I have enough scarves... 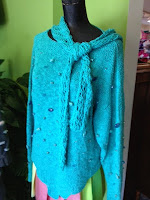 Unfortunately, the book containing the pattern has a bunch of other patterns, none of which I like; they are weird. For example: 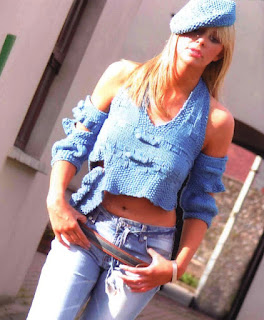 It's called the Lough Tay. I have no idea what that means, unless it means tacky, really, really tacky. And ugly. Really, really ugly.

It probably doesn't though.

If anyone would like to buy this book for half price or quarter price or a dollar after I have finished the sweater, I would be very happy to unload it on some sucker share it with someone.

This book will want a new home.
Posted by knittergran at 11:16 PM 1 comment: