A couple of years ago I bought two colors of laceweight Miss Babs yarn to make a particular pattern.  However, I think they sold me the wrong weight by mistake because the resulting scarf would have been the proper size for an American Girl Doll.  So I ripped it out and saved the yarn for future use.  Then I learned how to do an advanced search on Ravelry and looked for a two-color project requiring 400 yards of each color of laceweight yarn.  And there it was, the Pink Silk Mimosa, designed by Jennette Cross at Hill Country Weavers in Austin, Texas. 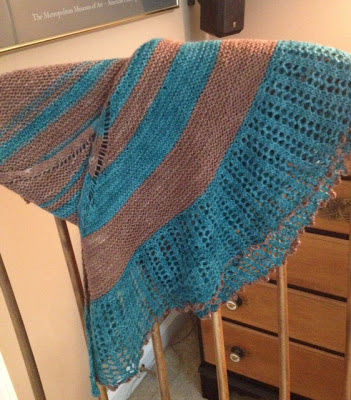 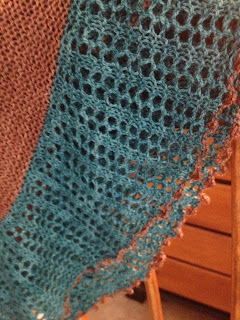 I ran out of turquoise yarn and could have taken out two rows in order to do the bind-off row, but I decided to use the brown and keep the extra length on the lace. This is the closest I have ever come to running out of yarn! 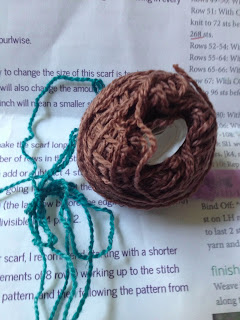 I had about 12 inches of turquoise left (and Baxter tried to eat it) and about six yards of brown.

Phew!
Posted by knittergran at 5:44 PM No comments: 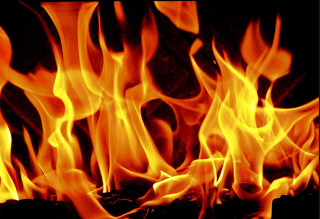 If you decide to make The Barefoot Contessa's boeuf bourguignon, and you read the part that tells you to stand back when you light the half cup of cognac you have poured into the contents of the dutch oven, she does really mean STAND BACK!!!

However, she forgot to say "Be sure that the flames that will be two feet high will not touch anything above them, say, like the bottom of the microwave." Because that will happen.  You know how I know this.  Right?

I will admit that I briefly considered running to get my camera so that I could take a picture because it was a pretty impressive scene, but then my better judgement kicked in and I put on mitts and pulled the pan out as far as I could on the stovetop so that I wouldn't melt the microwave.  This would not have been the first time I accidentally set something unintended on fire, but I sure didn't want it to be the first time I intentionally let something burst into flames.
Posted by knittergran at 3:55 PM 1 comment:

What More Could I Ask For?

My kitchen is finished!

My hydrangeas are blooming! 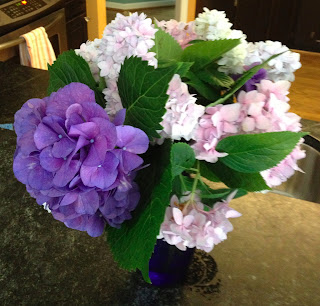 Posted by knittergran at 3:32 PM No comments:

Email ThisBlogThis!Share to TwitterShare to FacebookShare to Pinterest
Labels: hydrangeas

that the Pioneer Woman swears when the new flour container she probably has that is probably just like mine (because she is such a copy-cat) dumps flour on the counter and floor when she is making her blueberry muffins?

I bet she does. 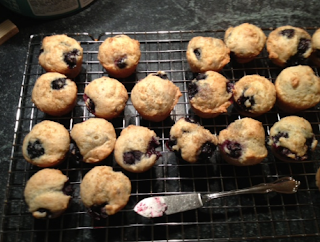 And if I were the swearing sort, which of course I am not, I would too.  It was just the crowning end to a day of annoyances, and yes, that is a paint can barely visible in the background because this kitchen project will.never.end.  I swear on all that is holy or holy-ish.

Three cabinet doors had chips in them, so the painter picked them up last Saturday to re-paint them.  I wanted them back today---she said "No problem," and we went to get them.  However, she had only just painted them this morning so they were still wet.  And still needed the spray coat of polyurethane.  Oh, joy. They are in our garage, still drying.

Maybe tomorrow they can go back on the cabinets, but in the meantime, we have been painting the white woodwork that has black splotches on it because I painted the pantry door black and my aim isn't always too precise. Although I do blame the brush.  And we have been touching up the yellow suede paint where other things have gone wrong, but then I have to put more white paint on the woodwork where the yellow paint got by mistake and then paint the yellow where the white, and maybe some black too, but who's looking, made its way from the door to the woodwork to the wall to the......

Oh well.  Someday the kitchen will be finished.

But in the meantime, I'm eating as many mini-blueberry muffins as I want. They're small.
Posted by knittergran at 8:19 PM 3 comments:

but the universe gives us this on Sunday night:


Posted by knittergran at 4:17 PM No comments:

It's a constant problem.  What am I supposed to LOOK like at my slightly advanced age?  I can't use my mother as a role model.  She didn't believe in hair color (it will give you brain cancer) and I do; didn't use makeup (I don't know why) and I do; and was entirely too friendly with Polly and Esther, despite living in Florida.  To my mind, Polly and Esther are entirely intolerable in Florida, and probably pretty much anywhere else.

So off I go to buy clothes.  And every time it is the same.  The staff at J Crew lock the doors when they see me coming.

And Talbots?  My former last resort when I didn't know what to wear?  I don't know what is going on there, but their offerings have been awful for years. Even though their clothes might have been a bit....conservative, boring...they at least were in style, sort of, and I could count on finding something appropriate for whatever occasion I was shopping for.  But now?  I never find anything there.

So there they are:  Chicos and J Jill, home of clothing for senior citizens.  On my most recent shopping trip, I didn't find anything at Chicos. I did at J Jill, but the problem there is that sometimes what they have reminds me of Garanimals---remember the children's clothing all designed to be very obviously matchy/matchy so that children could put together their own outfits? Even the tags were color-coded to give clueless kids a clue. That's what J. Jill clothing sometimes looks like to me.  Too obviously matchy/matchy, just without the color-coded tags.

and instead of pairing it with the cropped pants that the saleslady told me were, ahem, supposed to go with it, I bought these:

And I picked them out all by myself.

When I asked my husband what he thought, he said that the shirt was ok, but that the jeans didn't go with it.  I told him, and I am pretty sure I am right about this, that jeans go with everything.

But maybe not, maybe he was right, since these aren't your normal jeans. Nope. They are called "boyfriend" jeans. Perhaps that is a clue that they are meant for younger women, the kind with boyfriends, not husbands of 40+ years. And oh, dear, now that I think about it, perhaps the shirt could possibly double as a maternity top.

Out I go, every day, still apparently clueless, hoping that no one makes fun of me, or that if they do, I don't notice.  But if anyone thinks that I am perhaps the world's oldest expectant mother, or that I have a boyfriend in spite of the wedding ring I wear, I might be wrong about all of my choices.

Polly and Esther.  Watch out.  I might have to join you.
Posted by knittergran at 11:56 PM 3 comments: