Even if separating eggs isn't a tortuous task for you, watch this how to. It's amazing---so amazing that I want to go separate eggs that don't even need separating.

It's not in English, and I knew this before I started watching it. However, when I couldn't hear it, I TURNED THE VOLUME UP. Did I think I would understand it if it was louder???

Posted by knittergran at 4:01 PM 4 comments:

I call this My Pool this time of year, when all of the kids have gone back to school. I guess the moms have had enough of pool time and just don't come here without their children. 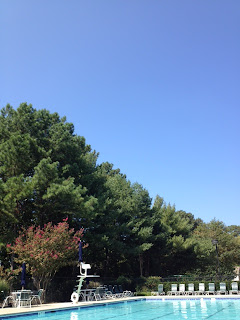 If I swim during the summer, I come earlier in the morning so that I avoid the pee soup that I assume the water becomes as the day goes on.

But all I hear today are some crows racketing about and a sole red-shouldered hawk  gliding overhead. There is a cloudless blue sky in spite of the hurricane that is slowly working its way north.  I suspect that for now, its only affect here is pulling all of the moisture out of our air in order to deposit it elsewhere.

So I am at the pool alone.

But I am writing this post on my iPhone.  I need to learn to leave the electronics at home.
Posted by knittergran at 12:23 PM 1 comment:

If Wishes Were Horses,

I would knit a Fair Isle sweater. 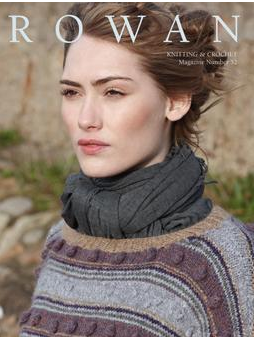 Or ride a horse, which I know is a lot easier. (my apologies to Shakespeare)

Even if I never knit anything from this gorgeous collection of gorgeous patterns, I will still love looking through the magazine.

When I returned to knitting about ten years ago, my goal was to make a Fair Isle sweater for my oldest granddaughter. As I did more and more research on stranded knitting, I became more and more intimidated and have never even started to knit such a sweater. dH says I should make one for myself, that grandchildren grow out of sweaters faster than I could make one. Good point, but that makes it literally an even larger challenge.

According to this Rowan magazine (#52), Fair Isle knitting comes from one of the Shetland islands and uses two colors on each row. The two strands of wool running across every row make for a very warm sweater, necessary in the climate. The style was popularized by the Prince of Wales (Edward VIII, who abdicated the throne in order to marry Wallace Simpson) when he was seen golfing while wearing a Fair Isle vest in 1921.

I had sort of written off ever knitting a Fair Isle sweater but when I look at these designs, I sigh and wish.......... 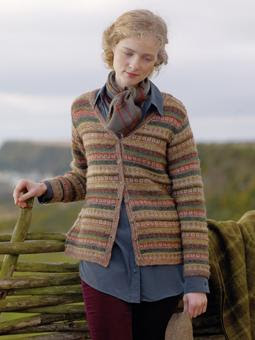 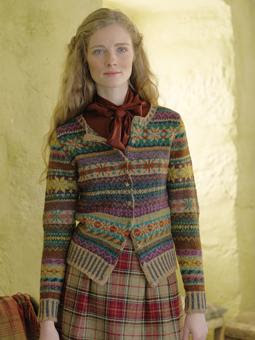 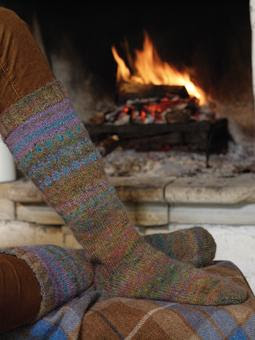 Or a horse.
Posted by knittergran at 4:40 PM No comments: 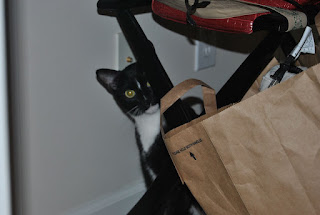 This photo was taken by Mrs. G during her visit. He was hiding from her.
He had his annual physical this morning, after a hairy ride to the vet's office. I could not get him into his carrier and called the vet to cancel the appointment. Instead, the receptionist told me that if I were comfortable doing it, I should drive to the office (only two miles away) with Baxter and the carrier in the car. When I arrived, I was to call the office from the parking lot and they would send a vet tech out to help.
That's what I did. The vet tech opened the back car door while I held on to Baxter; I was sitting in the driver's seat. I handed Baxter to the vet tech and she quickly loaded him into his open carrier on the back seat. He was happy to get into the carrier to get away from this stranger.
His appointment was a breeze. He weighs nine pounds and is perfectly healthy. I had him chipped so that if he ever gets outside again, whoever finds him can have a vet scan his neck area, and the vet will be able to track us down. I hope we never need it.
Now he is back home---after willingly riding IN his carrier for the return trip---and is busy licking all the vet and vet tech cooties off of his fur.
Posted by knittergran at 12:47 PM 1 comment:

Don't Let Anyone Tell You 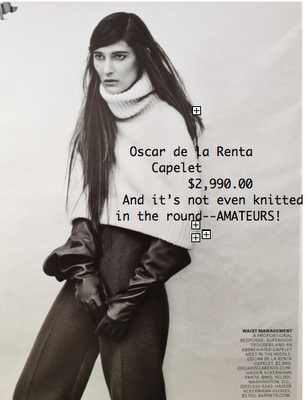 That knitters don't save money. This Capelet by Oscar de la Renta costs $2,990.00. It is probably knit by machine and the ad doesn't specify what it is made of. It had better be kiviat.
I don't understand the garment either---it looks like something that would annoy me. Every time I reached for a door handle, for something from a store shelf, for the steering wheel, the capelet would ride up to my shoulders. I won't be making one, no matter how little it would cost to knit it myself.
(And I don't know how to get rid of the those editing marks. Mac help anyone?)
Posted by knittergran at 12:15 PM 2 comments:

You would be wrong. This project is a vest. Vests don't have sleeves. 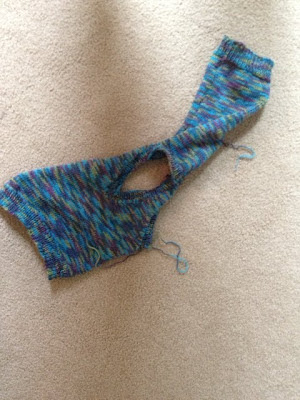 Sorry for the delay. I was eating a popsicle.

Now, for the vest. I learned a very cool and neat way to cast off (sewn cast off---brilliant!) and once I finished doing that, I turned on a podcast to listen to while I sewed the side seams of the vest. I clicked on (by accident. I thought I was turning on Wiretap) Radio Lab and the participants were talking about the very interesting Argentine ants.

Yes, interesting. They migrated via ships from Argentina to New Orleans during the 1800's and now can be found all over the world. How do the evolutionary biologists know this?

Well, I'm glad you asked: they put some Argentine ants into a jar, add some mystery ants, and once they sniff each other, they either get on with whatever they had been doing (trying to escape from the jar, I suppose), or they fight to the death. The Argentine ants always win which is why they now live even in Australia. That is pretty amazing since they can't swim. The ants love our freeways and our ships, apparently, and use them to take over the ant world!

While I was learning all about Argentine ants, I was sewing the sides of the vest together. The problem is that I sewed the two side edges of the back together, making a tube and not a vest. And I did such a good job of sewing the seam, tying up the ends, and weaving them in to the fabric of the vest, that I CANNOT get the seam un-sewn. 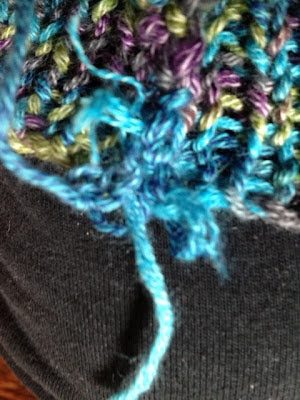 I'm nothing if not stubborn, however, and I hope to get this problem solved before I have to take the so-called vest to knit night on Thursday and beg politely ask someone to help.

And no more listening to NPR podcasts while I knit.
Posted by knittergran at 4:00 PM 1 comment:

Why I Don't Often Swatch

Reason 2: I believe it was the Yarn Harlot who said:  Swatches lie.

And before I give you Reason 3, this is what I am up to:

I have just started working on this v-neck vest for my grandson. It is the Fundamental Junior Vest #F07 published by Figheadh Yarnworks and designed by Jen Hagan. The pattern includes instructions for each of four weights of yarns, and I decided I wanted to make the one for 5 stitches/inch since I am working with yarn that is slightly less thick than worsted weight. 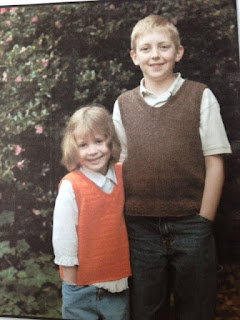 The yarn I found in my stash (Euro Baby Sweetness) works up to 5.5 sts/inch on size 5 or 6 needles. So for once, I decided to make a swatch to see which size needles to work with and which size vest to knit. 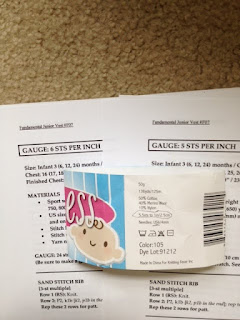 I knit the swatch with size 5 needles, figuring that they would be right on the 5 sts/inch that I needed. But it came out to 5 and one thread of the next stitch/inch. Close enough, I decided.

Uh, NO. That one thread of the next stitch is the ONE HALF stitch that I don't need. But since I ignored the swatch, I started knitting on size 5 needles and had a HUGE sweater back.

So, Reason 3: Even if the swatch does lie, I don't listen anyway, so it doesn't really matter.

I ripped out the knitting I had done and started over using size 4 needles. Now I am on gauge (I assume, haven't measured but the fabric looks nice) and I'm on my way.

I read some of the comments on Ravelry about this pattern from other knitters, and several people mentioned knitting this in the round. I thought: How on earth would I convert this pattern to an in-the-round pattern? and kept knitting. A few inches in, a lightbulb went off in my puny brain and I realized just how easy it would be to do.

And then I decided to just keep going. Next time, if there is a next time, I'll knit it in the round.

(But I'm having second thoughts...)

This is the skirt I made for Lily and I am happy with how it came out, even though I wasn't sure that the Knit Picks Cot Lin was a good choice for the pattern. It worked out well enough, and it's twirly and swirly, just like Lily. 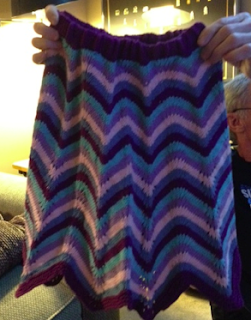 I am skirted out. No more skirts.

Posted by knittergran at 2:27 PM 2 comments:

Generous! That's What I Am! 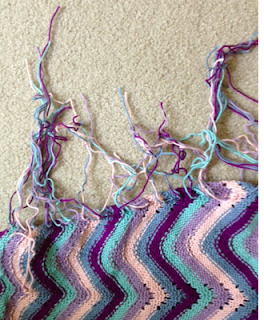 And yet my daughter just can't bring herself to accept my generosity.

See all these strands of yarn left on Lily's skirt? Well, they all need to be tied off and woven into the skirt's fabric. I generously offered to send the skirt as is to my daughter so that she could enjoy doing this, but she said "No, thanks."

I can't think of a more perfect task for her. It's easy and she could do it while watching her four children. And yet she says No.

On an unrelated subject, yesterday I had a procedure the name of which starts with a "c" and ends with "oscopy." It was everything everyone had said it would be and even more. And my friend who might be named Kathy and who has been nagging encouraging me for about a year to have one done, is relieved that I did. And while I can't say I am happy about finally having it, I will admit that it is a good thing that I did.

Oh, and my prescription for the stuff I had to drink the night before says this:

Gosh, and I had a few hours I was looking forward to filling on Saturday.