Well, finished as in I had been working on them for months and just coincidentally finished them within four days. 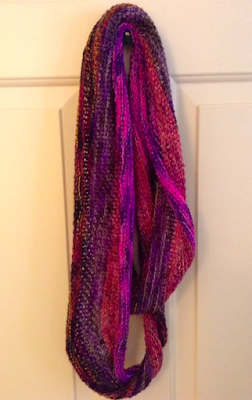 I THOUGHT that I had joined it in the round with no twists.  hahahaha... When I tried to pin it out to block it, I couldn't even figure out how many twists were in it. When I wrap it around my neck a couple of times it won't matter that I messed it up added a design feature of my own. 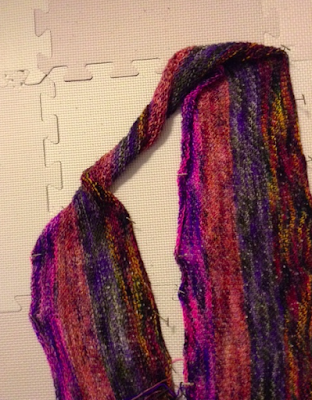 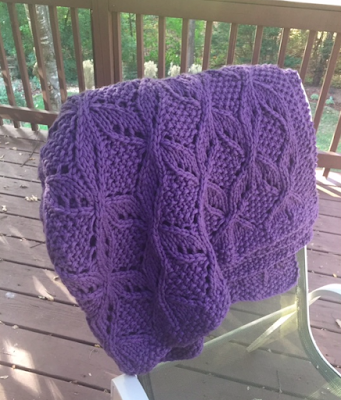 This one seemed to take forever, but I think it's because it was my third---and last---for now. And thank goodness for fellow knitters. Somehow I ran out of just enough yarn, about two yards, to cast off. Another knitter was knitting a different blanket with the same yarn and gave me the two yards to finish it. 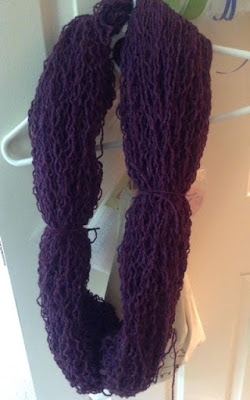 I've just frogged my Brooklyn Tweed Shelter yarn, AGAIN. I had swatched and swatched and swatched this yarn in order to get the right gauge for a sweater I wanted to knit, but the swatches all lied and I had to rip out the first incarnation of the sweater. I changed needle size, got a drape I liked in the yarn, but still didn't like the way the sweater was working out. So I've frogged the whole thing, including the twisted rib beginning of the sweater and sleeves. I  thought I might soak the hank because the yarn is all squiggly, and I still might, but I'm putting it all in a time-out and maybe everything will behave better next time.

Now, on to Ireland and the UK. I first wandered around England, Scotland and Wales with my husband, and then joined my sister in Ireland.  So---photos!

Sweaters for sale were everywhere, and ON sale too, which seems odd timing considering winter should be on its way. I saw this neck border on several sweaters and loved it, so I investigated.  It is knit separately from the sweater and then attached to the neckline.  I may try it out someday. 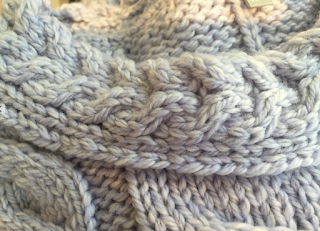 This is a bike outside of this cute little shop in Derry. All the knitted goods inside were for children younger than my grandchildren, who live in hot Texas anyway, so I didn't buy anything here but it was fun to look at all the gorgeous knitting. Some of Edel MacBride's patterns are available on Ravelry. 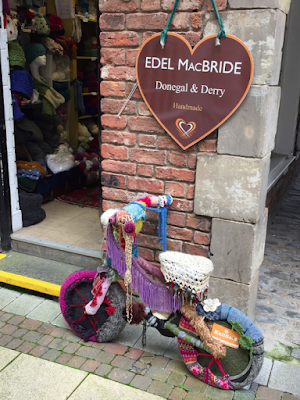 Photos in no particular order:

Who says it's always raining in the UK and Ireland??? 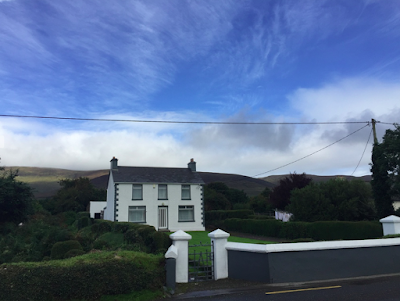 The view of the back of Kilkenny Castle: 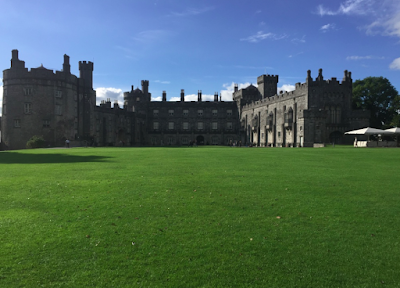 A portion of the wall around the city of Derry/Londonderry. 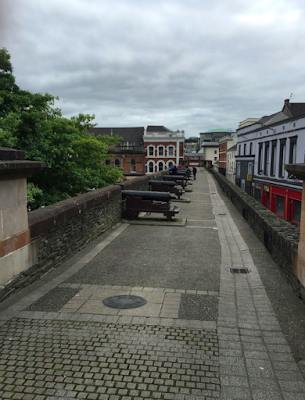 Just some of the oddly shaped rock formations at the Giant's Causeway in Northern Ireland. 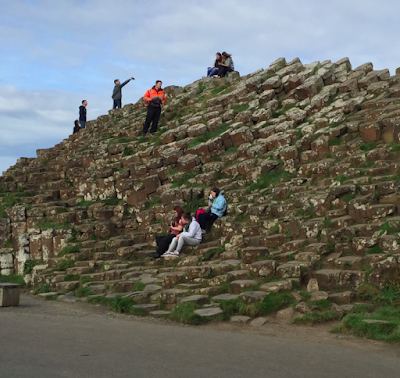 A hurdy-gurdy player in Galway.  I had never seen one before and had to google it to find out what it is: 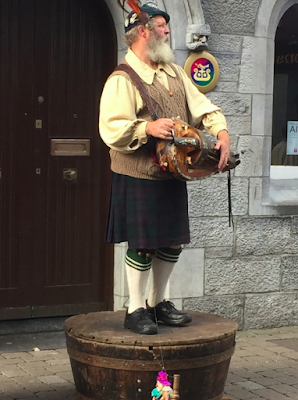 An old school at the entrance area to the Giant's Causeway: 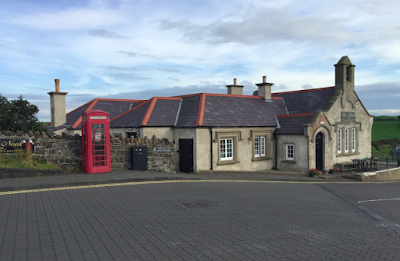 Complete with the iconic red phone booth. We saw one of these in London painted black and with a sign indicating that it is now a source for WIFI.

A pretty street---I don't remember where it is and the new iPhoto program no longer identifies location for photos. Either that or I have some setting wrong. 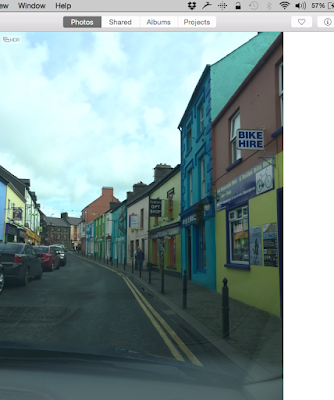 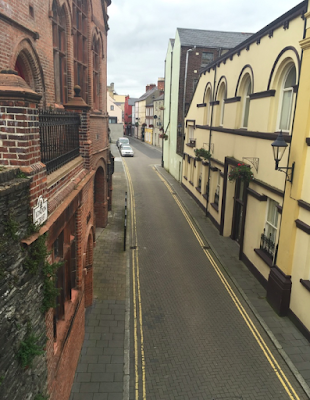 Sheep wandering wherever they want: 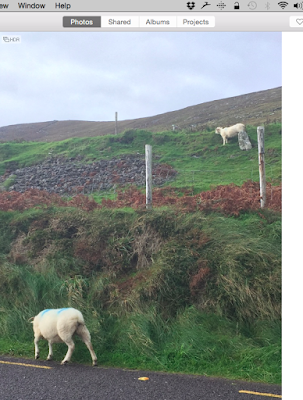 A quaint view from a hotel window near Dublin.  hahaha.  Wind turbines are everywhere, and I imagine that with all the windy days they have, these are a good source of electricity. 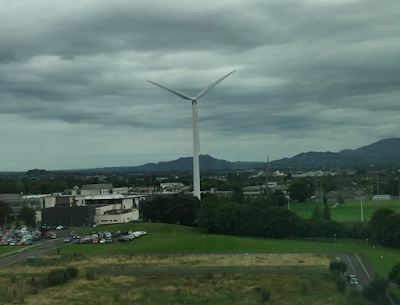 More to come.
Posted by knittergran at 2:06 PM 3 comments:

to the island nations of the UK and Ireland. I just spent about three weeks wandering around both islands, and to have enough space in my luggage for whatever I might buy to bring home for my grandchildren and me, I followed the advice of two friends who travel a lot with only carry-on luggage. They do this by saving soon to be discarded clothing (underwear and shirts, whatever, isn't readily visible to the public) and discard them along the way. I did that, and it is a great idea, except that I don't know where island countries put trash. 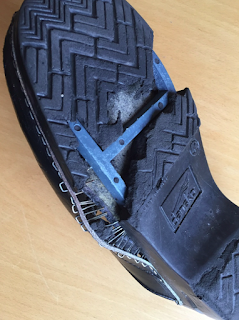 This is, or rather, was, my right Dansko clog, which I alternate wearing with my sneakers when I have a lot of walking to do. My sister and I checked into our hotel, left for dinner, and when we returned, there was black crumbly stuff on the floor.  Hmmph. Some vacuuming job, we thought.

The next night, in a different hotel room, the same thing happened. Hmmmm. Must be one of us picked up something outside...two days in a row???

Not likely, so we checked our shoes and my Dansko had disintegrated.

Out it went. Off to a landfill I suppose. I read once that we don't really throw things away; we just put them someplace else (like the landfill) and that's true. So I apologize to Ireland.


But my sister and I had a great time and it could have been different. The last time we travelled in a car together was many decades ago and the trips involved: Mom, she's in my space. Mom, she won't stop looking at me. Mom, D (our brother) is bugging us. Good times, y'all, good times.

But none of that happened on this trip. And as a bonus, my sister is a map genius! Who knew! I am definitely map-impaired and need instructions: turn left at ...., go straight for 11 miles, etc. She was the perfect navigator and I could concentrate on driving a manual shift car, shifting with my LEFT hand, driving from the RIGHT side of the front seat, on the LEFT side of the road. I adjusted by the second day so it was easier than I had anticipated.

Enough!
---time for pictures of a gorgeous country: 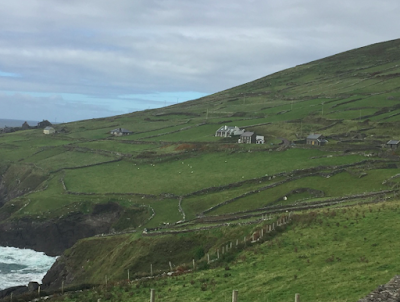 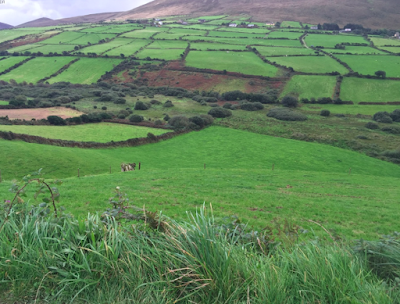 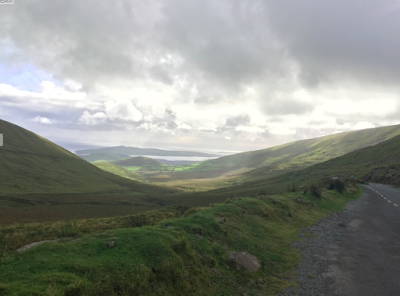 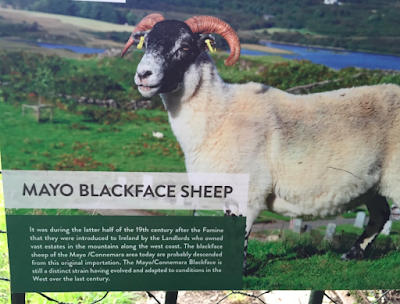 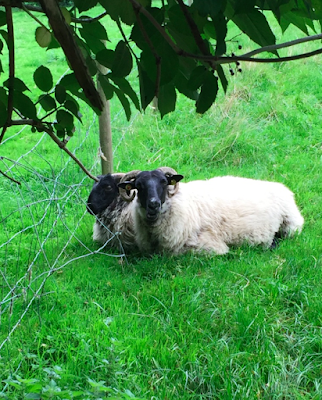 Came across a wedding party at Bunratty Castle:

Watched a rooster and chicken try to share tea with a visitor at the tea room at Bunratty Castle: 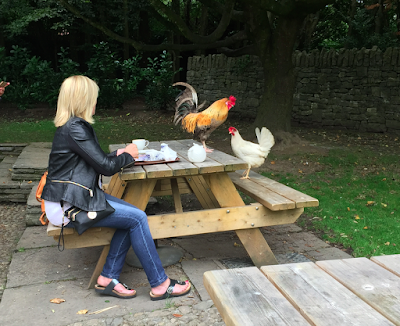 And we climbed way too many tiny stairs to get to the top of Bunratty Castle: 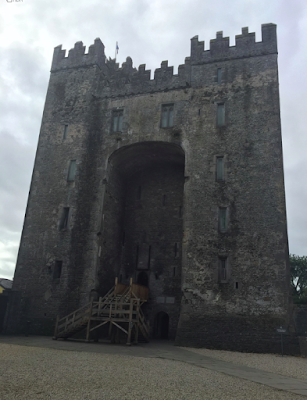 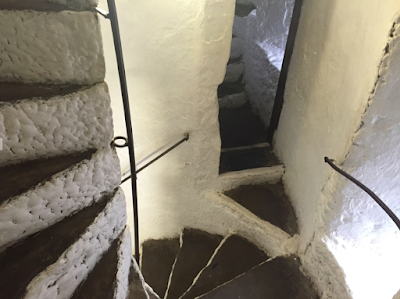 All for now! I will put up more pictures when I organize them in my brain...and on my computer.
Posted by knittergran at 12:49 PM 2 comments: