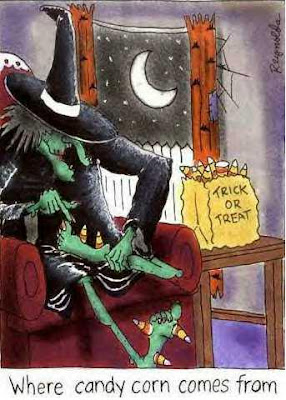 Posted by knittergran at 9:47 AM 3 comments:

Today he is losing his manhood. And he didn't even know he had manhood. 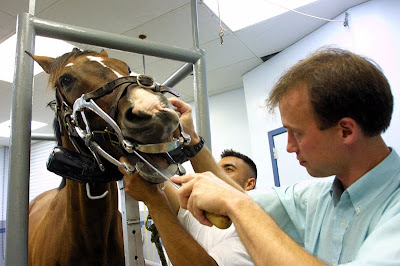 But on the upside, I can knit unmolested until 4:00 when I pick him up and bring him home.

And yes, this is not Baxter. But I like horses too. I always wanted one. Or two, so they could keep each other company.

Not going to happen, though.
Posted by knittergran at 10:27 AM 1 comment:

But this is the sign that greeted us at the entrance. Some very confused tractor fans must have shown up and wondered what all the yarn was doing at their tractor show....and where were the tractors??? 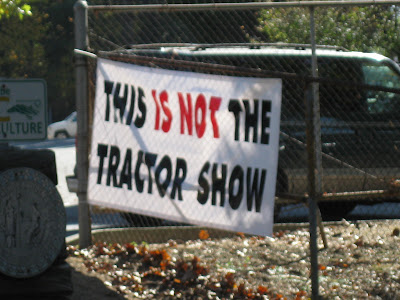 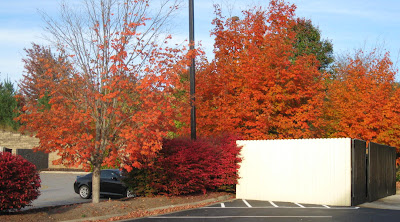 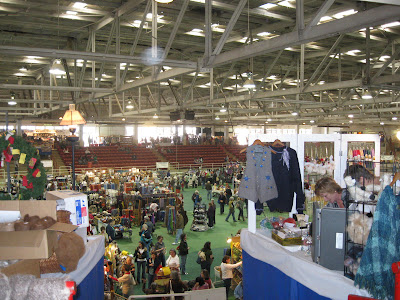 .
WE CONQUERED.
(We found lots of yarn that we needed. Really!) 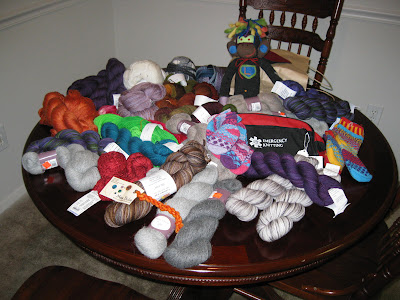 And I learned something new.
Chart reading. 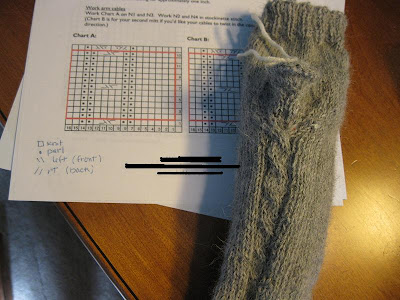 We decided to make a souvenir project---fingerless gloves, and doing that necessitated reading charts for the pattern. I have always avoided charts, but these were easy. They were for knitting in the round, so there was no reading backwards or upside down. I finished the thumb on glove one yesterday, and now I look forward to the second. They are made on size one needles and have some weird stitch combinations in them. It was intimidating the first time, but now? No problem. (I hope.)
And Anna, one of the Coven, won first prize for a beautiful scarf that she designed and knit. It was worked in double knitting, and even though I watched her work on it week after week at Thursday's Knit Nights, I still don't understand how she did it. She tried to explain it to us, but it just didn't click with me. We have all admired it and she had dismissed it as no big deal. But now she has to admit that we were right all along!
Posted by knittergran at 12:00 PM 1 comment:

Email ThisBlogThis!Share to TwitterShare to FacebookShare to Pinterest
Labels: SAFF

Tomorrow morning at way-too-early-for-me o'clock, my knitter coven and I are leaving for SAFF, the Southeastern Animal Fiber Festival in Asheville, North Carolina. This will be our third year there, so we know what to expect. Lots of yarn, yarn-yielding animals, and yarn accessories.

We have made a pledge not to buy yarn this year because we all have yarn and projects galore. (Unless we come across never-before-seen-must-have-for-that-yet-unknown project we've always wanted needed.)

We'll see how this goes.
Posted by knittergran at 8:35 PM 1 comment:

Email ThisBlogThis!Share to TwitterShare to FacebookShare to Pinterest
Labels: SAFF

I Am the Boss of My Knitting! I couldn't find anything on the internet or in my books to tell me how to fix the twisted stitches I caused when I joined the cast on row on circular needles. So I decided not to cry and start over yet again --- not that knitting can cause me tears, (well, there was that mohair sweater )--- and instead I made up my own solution.

I worked over to the first joined stitch and then used a crochet hook to take that one stitch back to the beginning of the piece. I flipped the knitting on the left-hand needle, switching the yarn strands to the side I needed them to be on (in front of or behind the needle; I can't remember) and remade the stitches with the crochet hook.

I doubt that this would work on yarn finer than worsted weight and on smaller needles, but it has worked here, and if it doesn't spontaneously unravel, I call it a success. Fingers crossed, though.

And on the next hat, I'm following Sigrun's advice and knitting a row or two before trying to join the ends. It should be easier to make sure the work is not twisted with a few rows on the needle first.

Thanks, Sigrun!
Posted by knittergran at 12:15 PM No comments: 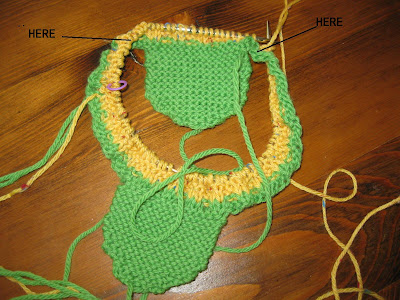 And here I am on row 8 or so, and I discovered that I have once again twisted the stitches. I was SO CAREFUL! I don't know how I did this AGAIN.

I know that there is a way to fix this without starting over. Jan at Knit Night did it once at a Thursday night's session and I listened to what she said, but didn't watch, and now I need to know how to fix this and I don't.

But I am NOT starting over; history shows that I will just twist the stitches again.

So I will do some research on line and in my books, and if I can't find anything I understand, I will just get to the point where the two ends joined, and do whatever it takes to untwist them. I am stronger than yarn. Maybe not smarter, but stronger.
Posted by knittergran at 1:23 PM 1 comment:

Email ThisBlogThis!Share to TwitterShare to FacebookShare to Pinterest
Labels: blurg

First of all, don't try this at home. 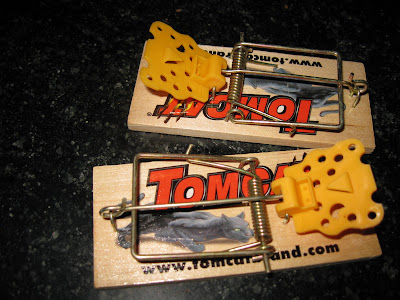 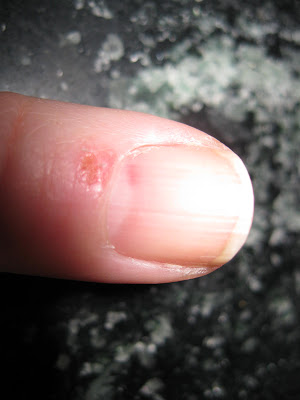 This hurt!!!! Really, really hurt. So the mousetraps are gone, and thank goodness they didn't snap on the kitten's widdle paws.
I didn't realize that the traps were so powerful, but as dH said, they are designed to KILL.

I feel like a fur trapper, and that's not a good thing.
And now, for something completely different: 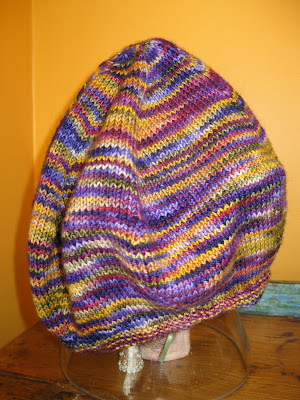 A completed hat!!!
It's the Koigu Beaded Beret, published by Churchmouse Classics, and made with just one skein of Koigu KPPPM. I just made it, with only 86" of yarn left over. Phew. This yarn would make wonderful socks, but there is not enough on one skein for a single sock, so a pair would take three, and that would make for expensive socks. But as a one-skein project, this one is nice. It is supposed to have beads on it, but I left them out. (You're welcome, S.)

The instructions say to "Wear at a jaunty angle or pulled down over your ears," so I guess it can be a beret OR a watch cap.
Posted by knittergran at 10:38 AM 2 comments:

I am trying to make this Flap Happy Hat, designed by Susan B. Anderson for Spud and Chloe yarn. 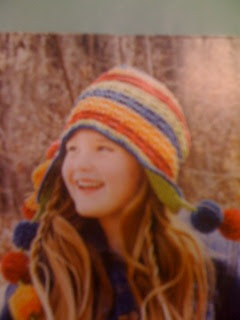 What I have made so far is a hat mess: 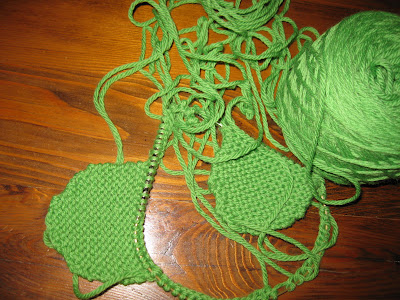 I've put the flaps on inside out and I don't even know how I did it so that I don't do it again, and I twisted the stitches when I joined the two ends on a circular needle. I am now in the process of frogging, then ripping out the whole brim.
Sallyknit!!! You have successfully made one so......Help?
Posted by knittergran at 6:40 PM No comments: