Mrs. G. and Derwad Manor are back. Mrs. G. formerly created and managed and wrote for the Women's Colony, but that came to an end a few months ago. Before WC, Mrs. G. wrote Derwad Manor, but left that to go to WC. And now she is back!!!

I called older daughter to tell her about this great news, but SHE ALREADY KNEW and hadn't told me. She said that if I were on Twitter and Facebook, I would have known, but since I choose to be ignorant of new communications forums, tough luck. (Not really. She apologized for not telling me.)

This one, about her brief flirtation with joining the Peace Corps.

Or maybe this one, one of her great letters to her mother.

Or this update on her neighborhood.

This morning SallyKnit sent me this ad for a cat tree-perhaps THE cat tree of all times! She said that she hoped that this was the one I had ordered for Baxter, since he is such an exceptional cat. Well, it sure is a cat tree-and ONLY $889.95. The reason we need a cat tree is that Baxter climbs EVERYTHING. Yesterday dh had the ladder out when he needed to change some light bulbs. He turned his back and this is what happened: 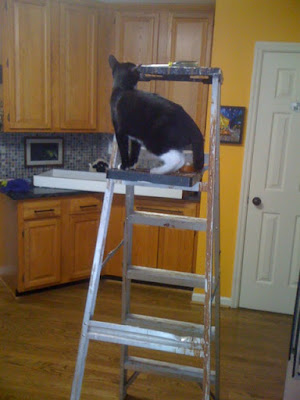 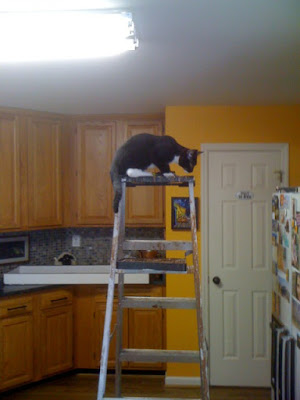 The day before, dh happened to look into the dining room, and there was Baxter, on top of a large box I had put on the table, reaching up into the chandelier, planning his climb into it.

This boy needs a tree! But since he must be an indoor cat, he can't have a real one.

Why he is an indoor cat:

He was born under a deck where the home's owner had been feeding 24 wild cats and kittens. As soon as the cat-rescuer thought the kittens were old enough to take away from their mothers, she rescued them. Baxter and his siblings went to live in the rescuer's home, where there were also seven adult cats and two adult dogs. They all got along and as a result, Baxter has no fear of other animals OR of humans. As the rescuer said, he has no sense.

Last night, we joined some friends who live about three miles from us for dinner, and they had had a warning issued to their neighborhood that several coyotes had been seen repeatedly wandering through the area. Another friend who lives in that neighborhood had her cat killed by coyotes two years ago. That same evening, she went outside to see two coyotes standing at her mailbox--- as if waiting for dessert, perhaps?

We had a rabid raccoon on our deck last year, and recently another neighbor was chased through her yard by a rabid raccoon. She fell, and the raccoon leaped and missed; the woman was able to get up quickly enough to run into her house and close the door before the raccoon could get to her.

Who knew the suburbs could be so dangerous.

So Baxter is an indoor cat, and we have ordered a much less elaborate tree than the one above, and certainly MUCH less expensive, thanks to Overstock.com.

Ninety years ago today women in the United States finally were granted the right to vote.

It took the 19th amendment to the Constitution to do it, but women suffragettes were finally victorious.

I can't even imagine how it would feel to not be allowed to vote. Weird idea now, isn't it?
Posted by knittergran at 3:24 PM 1 comment:

Email ThisBlogThis!Share to TwitterShare to FacebookShare to Pinterest
Labels: vote

Why I Don't Own a Dog 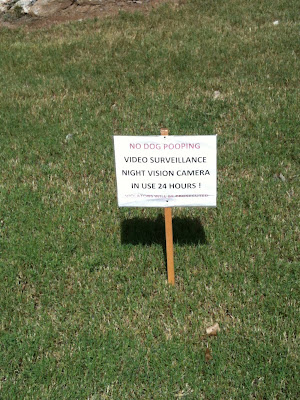 I was reading Murrmurr's post about all the plastic we use, and noticed that one of her readers left a comment about how she likes to use plastic bags in cold weather to pick up dog poo when she walks the dog. She says she puts the warm poo in the bags and then puts the bags in her pockets to keep her hands warm. Euwwwwww........................{{{{{shudder}}}}}

Anyway, reading that reminded me of this sign posted in front of a house in my neighborhood. Dog owners are supposed to pick up after their dogs, but apparently someone isn't.

What this homeowner will do when he gets film of the scofflaw I can't imagine. Shoot the guy? Kick the dog? Call the police? I don't know.

Nice try though.
Posted by knittergran at 7:30 PM 2 comments:

Email ThisBlogThis!Share to TwitterShare to FacebookShare to Pinterest
Labels: dog-walking

This partial scarf is the proof that I shouldn't buy yarn without a pattern in hand. I am just not an experienced enough knitter to buy yarn, thinking that I can turn it into a ..... without knowing for sure how many yards I need.

This is made from yarn younger daughter picked out when I was visiting her in Los Angeles, and I was sure that I could make a scarf out of it. I probably can, but not this scarf. 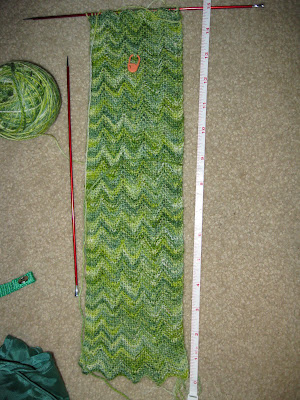 The measuring tape shows that the scarf is fifteen inches long. I weighed the yarn that is left, and I have just about half of the original skein to go. So that will make the scarf a whopping 30 inches long.
Not what younger daughter or I had in mind. 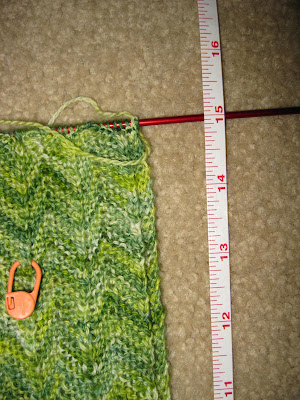 I will frog this (AND it was knit on size TWO needles-grrr....) and start again. I may use some gorgeous Rowan silk haze yarn, or I might look for a coordinating sock yarn on Thursday.

In the meantime, I will work on the fronts of this vest I am making for one of my two older granddaughters. I will eventually make two of them, and since they wear the same size now in most clothing, they can share. (Their mother laughs, scoffs at this concept.) 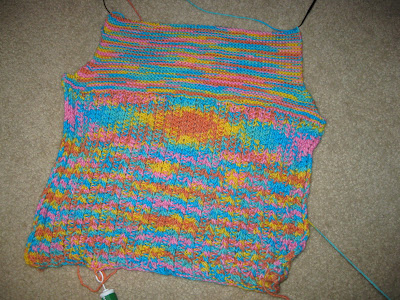 I'm not wild about the colors-sort of bright? gaudy? garish? I don't know. I just hope one of the girls likes the colors.
I have two other projects otn now. Finishing the skirt freed up knitting time, but I find that I miss the focus that having one large project gave me. Weird, isn't it?

Posted by knittergran at 1:28 PM 3 comments:

What Baxter Won't Be Wearing 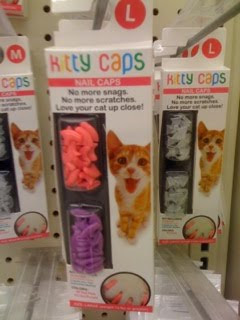 No matter how much I love pink and purple.

I get the point (ha, ha, ha), but can you imagine how bloodied and bruised I would be if I tried GLUING these things on my very feisty kitten!!!
Posted by knittergran at 1:12 PM No comments:

Don't Try This at Home

Yesterday I tried to make sugared/spiced pecans by following a recipe from a friend's Junior League of Somewhere cookbook. This is the recipe:

According to the recipe, all I had to do was saute all the ingredients until the sugar caramelized. That's what I did. Then, following instructions, I put the pecans in a small paper bag to cool.

This is the result: 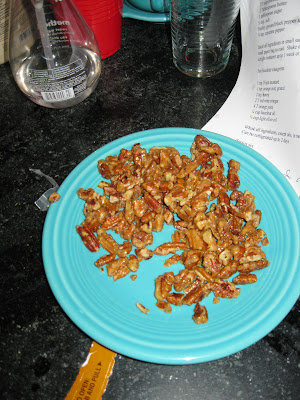 Yes, they look fine, but they were awful---very, very salty with no sugar flavor at all.

I called my friend, the great cook, to see if she had any advice. She looked up another recipe and told me to put it all together, melt the sugar, and then boil for five to eight minutes. She also warned me that even a few seconds too long, and the pecans would go from caramelized to burnt. 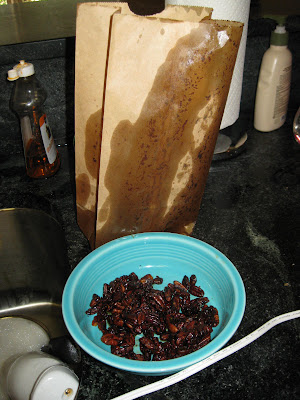 And do you see all the butter soaking the bag? A lot of the butter is absorbed by the pecans, but not all of it. Heart attack in a bag, that's what these things are. If you could eat them. There is no word to describe how really awful burned, sugared pecans taste. It took a shot of Tequila to get rid of the flavor. Really.

So then my friend suggested I look online. And I followed the recipes I found, none of which called for butter or for sauteing. 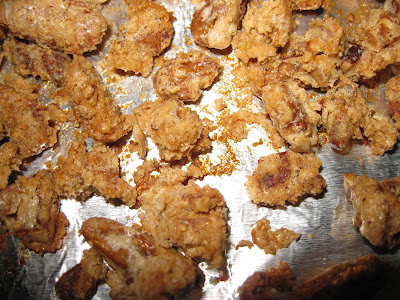 This is the result. Can you see the pecans? Neither can I. The recipe called for coating the pecans with foamy egg whites, and then coating them with sugar. Then baking them. I think I used too much egg white.

They taste almost right. Sugared but with a LOT of crunchy merengue.

Later in the evening my friend called to tell me that she thought that I could BUY sugared pecans - already made! - at Fresh Market. I looked on their website and there they were.

So first thing this morning, that is where I went. And I bought these: 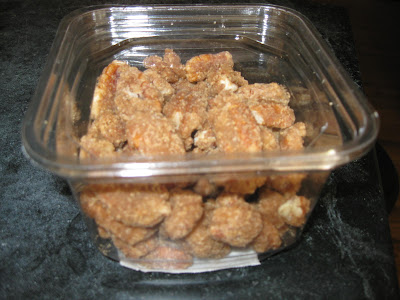 Lesson learned. Let someone else do the cooking whenever possible.

Posted by knittergran at 6:07 PM 2 comments: 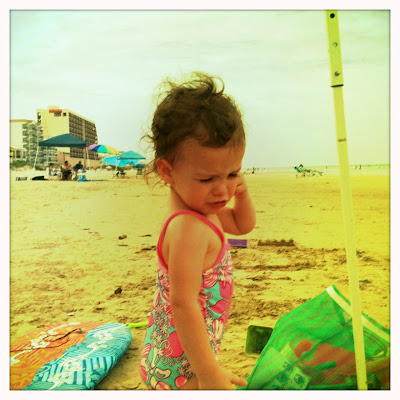 Older daughter is on vacation at the beach off the coast of Texas and e-mailed me this photo of Elizabeth. She captioned it: Elizabeth isn't sure she likes da beeps. Older daughter claims to be taking the week off from using electronic gadgets (although she did send out this photo), but if she is true to her word, I can steal this photo and use it on MY blog!
I think the problem is that Elizabeth would rather be at Knittergran's.
Knittergran has m&ms...
and knows how to use them. 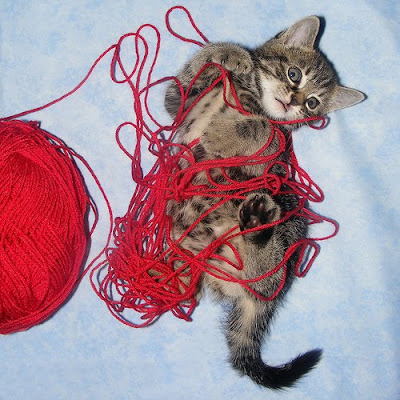 Knitting: 0
Kitten: 12,000,000
I may have to give up knitting until Baxter grows up a bit. Or just knit at the shop on Knit Night.
If I try to knit when Baxter is asleep, he somehow senses that I am seated, and any lap that exists must be sprawled on.
If I try to knit when Baxter is awake, well, I just don't. I've learned the hard way. Not only is the yarn's movement too, too exciting to ignore, but apparently the needles and whatever is on them is an enemy to be attacked.
It's a good thing he's cute.....and that I'm a sucker for cute.....
(photo from Google photos)
Posted by knittergran at 9:21 AM 2 comments: 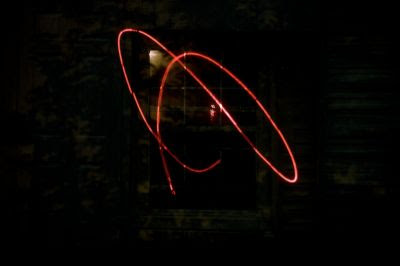 Recently the author of Hyperbole and a Half wrote about using an online IQ test for her dog, which she worried might be retarded. (Sadly, it turns out that he is.)

I have just come up with an IQ test for both kitten and human:

Hypothesis: A human is smarter than a kitten.

Procedure: Conduct the Chase the Red Laser Dot test many, many, many times.

Conclusion: Knittergran is smarter than Baxter.

Therefore: Humans are smarter than kittens.

(And no, I wasn't chasing the dot; Baxter was. Thanks for asking.)
Posted by knittergran at 7:01 PM 1 comment:

Posted by knittergran at 1:38 PM 2 comments: 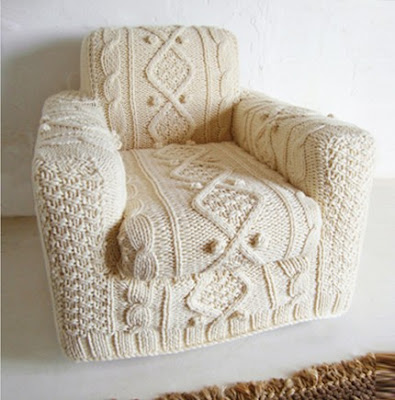 Available on Etsy
I hope whoever made this had a knitting machine. I can't imagine making them to order---or even making the first one!
Posted by knittergran at 9:26 AM 3 comments: