What's happening with Knittergran?, you may ask.

Well, she can't knit and watch Breaking Bad at the same time.  She discovered this after making a few too many mistakes in her knitting.  So now that she is caught up on BB, she has been knitting.

And she should stop referring to herself in the third person.  It's just weird.  She is not royalty.

So I have been catching up on knitting! 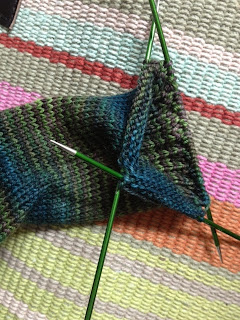 AND I have been working on the tricky Miss Winkle scarf: 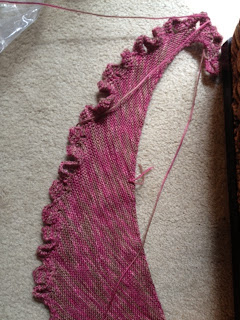 I don't want to think about how many loops I have attached the wrong way and have had to frog.

AND I have finally, finally, with the help of several Ravelers, gotten started on the Currant Cardigan.  It has been the most difficult project I have attempted because of the new cast on and new stitches I have had to learn.  And I was reading the charts wrong because the right side rows are usually odd-numbered (I think) and the wrong side rows even-numbered (I think) and this was backwards to me, but I didn't realize it until I had done parts of a couple of rows um...backwards?  I'm not actually sure.  I was so confused.... A very experienced knitter on Ravelry helped me sort it all out. And then I frogged. 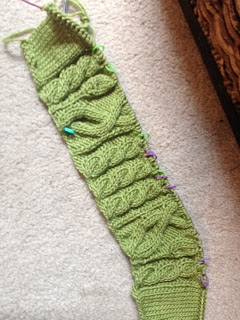 AND I may have discovered that I am no gardener.  So far, this is the total of my crop of peppers: 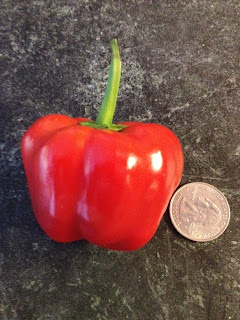 We have had something like 16" extra inches of rain this summer, so maybe that's the problem.  I have no idea.

It tasted great.  So there's that.

Anyway, Breaking Bad is on tonight, but I will record it and watch it later without the ads.

Sorry, advertisers, but you break up the mood, the color, the ambiance, the sounds, the carnage, the blood, the swearing......... maybe the ads are a good thing.


is this a spoiler?  Or just crazy fun at Comic Con? 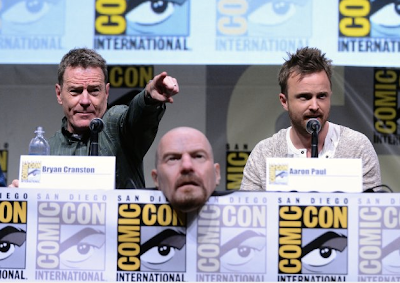 Posted by knittergran at 4:58 PM No comments:

I just watched last night's episode of Breaking Bad, after catching up on all the past episodes.

And day-um is all I can say.


But boy howdee!  Doesn't Jesse have perfect teeth!!!  You know, for a meth-head and all. 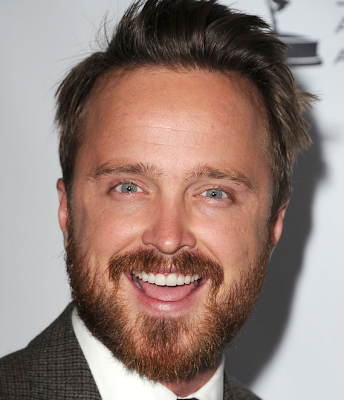 My daughters think that this should be my next birthday cake: 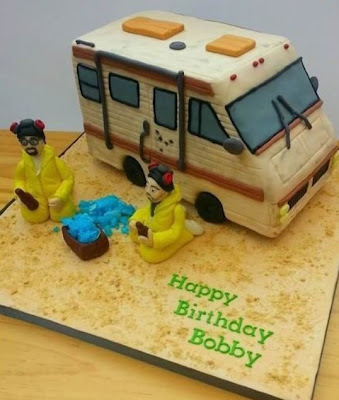 Except for the Bobby part.

I truly hope and pray that this cake was for an adult using a childhood nickname and not for a child whose parents are paying NO attention to what their CHILD is watching on tv.

So now I have watched all of Season 3 and have started watching Season 4.

Do NOT watch the first episode of Season 4 if you are alone.  Or don’t watch it at all.  Leave a comment asking what happened and I will tell you.  I didn’t watch it, or rather, I didn’t SEE it.  But I did hear it since I couldn’t cover my closed eyes and my ears at the same time.  And I guarantee you that you don’t want to see it.  OR hear it.

And on to more of Season Four:

A friend of older daughter’s said that Season 4 would change my life.  There were no specifics mentioned, so I don’t know what to expect.  It is, however, possible that I might become, oh, just a wee bit overly concerned about Jesse, and then become so upset with what Walt has done to WRECK Jesse’s life that I forget that it is fiction and I get on a plane to Albuquerque and I hunt down Walter White like the animal he is and then I do whatever it takes so that I can pound him into the hot New Mexico desert sand.  Where he will stay for-EVER.

Posted by knittergran at 6:16 PM 2 comments: