What Color Pony Do You Want? 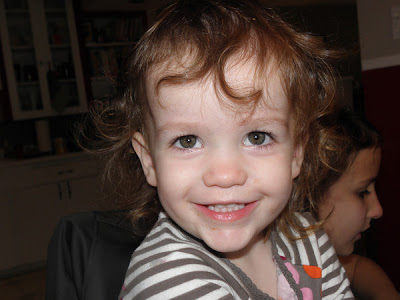 Older daughter just called me to tell me about her conversation with Elizabeth (2). Elizabeth came running out of her bedroom this morning carrying a jacket.

E: Wook! It's a sweater Gwan maded for me!

oD: No, Gran didn't make that.

E (after a puzzled pause): Gwanpa maded it?

Elizabeth remembers me!!!! From a month ago!!!

This is what I want to knit RIGHT NOW. I have the pattern for it, but not the yarn. It is a Brooklyn Tweed pattern and I love the Shelter yarn he made it from. My LYS does not sell Shelter; I could order it by mail of course, but it wouldn't be here RIGHT NOW. 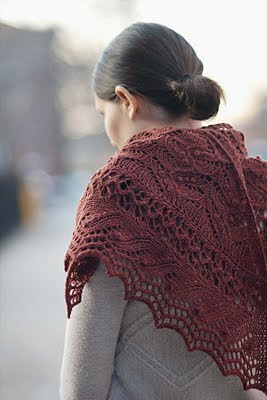 Immediate gratification is I. Me. I? Me? 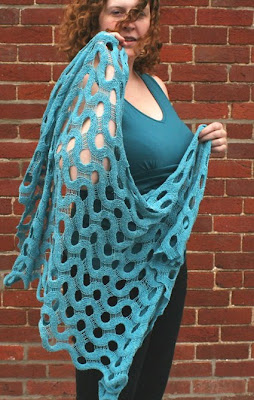 I have the pattern AND the yarn for this wrap (Summit Shawl) and I was very enthusiastic about making it months ago when the yarn arrived. I have seen it in person and it's beautiful. It looks difficult but I'm told it is not, once the stitch pattern clicks in the brain.
BUT I really, really, really want to knit the Brooklyn Tweed Juneberry Triangle.
RIGHT NOW!
Posted by knittergran at 2:56 PM 3 comments: 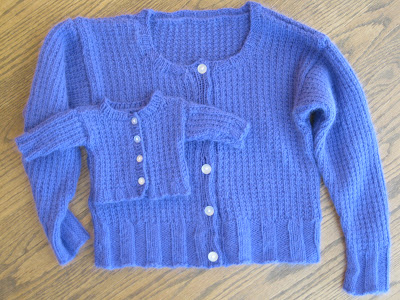 I have just finished these two sweaters, one for my second granddaughter, who will be eight on February 3rd, and one for her American Girl Doll.

The pattern (American Girl and Doll Cardigans)(here on Ravelry) is from the Classic Elite Yarns website, and these two sweaters are made from five skeins of Class Elite Yarns Fresco yarn (60% wool, 30% alpaca, 10% angora).

First of all, isn't this sweet? I just found the note that I had misplaced when we came home from Christmas in Austin. We hired a neighborhood girl to come twice a day and feed and play with Baxter.

She left US a thank you note! 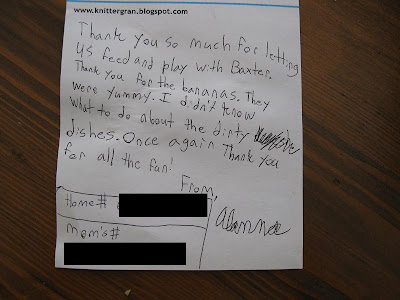 And I just learned yesterday about a Sticky Notes app for my iPhone. (I am a VERY late adaptor!) It's perfect for me because I do write notes and lists for myself, but then I leave them at home when I run errands. But I never leave my gawjus phone at home. 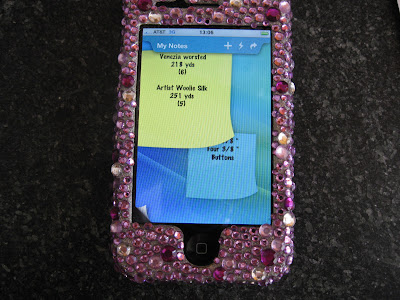 Uh, Three Things Thursday (also not an official blogworld event , but alliterative, so it sort of counts as one)
The third thing: I made this last night and it was DELICIOUS!!! I have used several of PW's recipes and they have all been a success. I really like the site because it has pictures of each step of each recipe, and truthfully?, I need all the help I can get.
Posted by knittergran at 1:25 PM 1 comment: 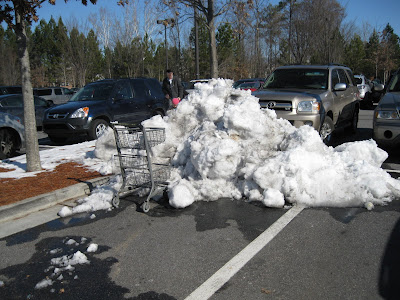 Today's Atlanta Journal Constitution contained an article about all the things we Atlantans learned from our recent snowfall and subsequent housebounded-ness. The Atlanta area DOT doesn't have enough equipment to plow roads or even salt and sand them adequately, so many of us were snowed/iced in for four or more days. We didn't have mail, UPS or FedEx deliveries, trash pickup or newspapers for days. Poor us!!!

The people interviewed for the AJC article talked about what they had learned: walking instead of driving to local grocery stores, making meals out of what was already in the pantry, sending kids out to slide down snow-covered hills on things people in the north would not have thought of as play equipment, and meeting and talking with neighbors they had previously only waved to in passing.

What I learned, on the other hand, is that there is only a snowball's chance in you-know-where that I could make anything edible out of what was in my pantry.

While I was housebound, I took everything out of the pantry to see what was in it. I found lots of antiques--- antique spices, grains, evaporated milk (best if used by 2005), very antique canned soups (I will not admit how old those were). I found a few things I had put in my own containers when I bought them years ago, but had not labelled, so I didn't even know what I had. Flour? Powdered milk? Cornstarch? I don't know.

And I found things that were still good, but that had been buried so deep in the pantry that I hadn't seen them in years: confectioners sugar, unopened spices and dark brown sugar. (At least I assume they are still good.)

But there was nothing in the pantry that could be combined to make a meal. Most of my adult life my husband has travelled for work, sometimes on short notice, and so planning meals a week or a month (like one of my sisters-in-law) in advance has never worked for me.

After I emptied and then re-organized the pantry, I had empty space. I still have empty space and no idea what to put in it. I bought soups, beans, pasta, sauces, different kinds of rices, tomato products galore, and still----empty space. 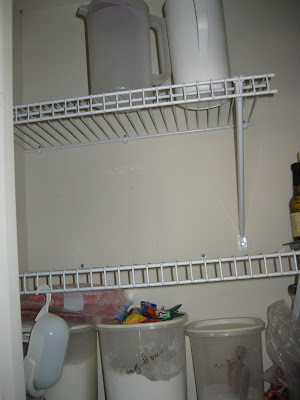 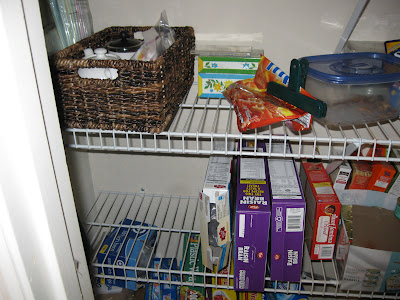 It's a good thing I am not responsible for feeding children.
What I have learned from the recent snowstorm is that I am not an organized and resourceful cook, but what I have NOT learned how to be one.
Pizza anyone?

Is a personal chef expensive?
Posted by knittergran at 11:28 AM 2 comments:

For the snow to leave. 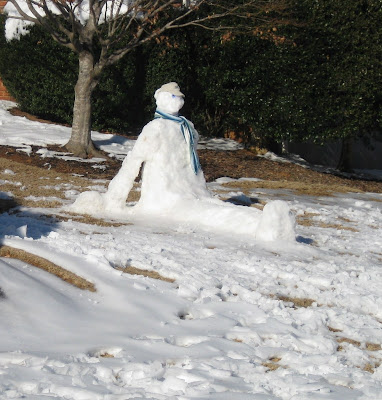 I passed this guy as I left the neighborhood for the first time since the snow came. The roads were iffy, some places wet, some slushy, and some solid ice.

But the grocery store is about two miles away, and I was desperate to get out of the house, and to get some junk food. My left eye is oozing green goo (you're welcome) so I probably shouldn't have gone anyplace, but I really, really wanted some new food.

I did find what was described as an all butter chocolate croissant. Score! And I would have bought some chocolate milk, but they were all out of anything but a few quarts of 2% white milk. I bought some Chex Mix---yay---and just to be healthy, some fruit.

But I've already eaten the croissant and some Chex Mix.

The fruit can wait.
Posted by knittergran at 4:04 PM 2 comments: 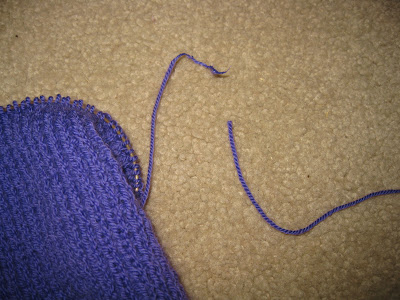 Shovelling Snow in the South 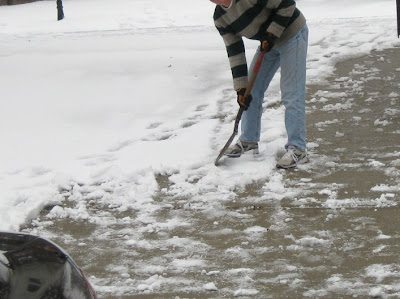 With a garden spade. It's all we have.

Why shovel? To eliminate as much snow as possible from the driveway before it melts a bit and then refreezes. Ice is worse than snow...but then, the roads won't be plowed anyway, so I doubt we are going anywhere any time soon!
Posted by knittergran at 10:54 AM 1 comment:

Snowed in in Atlanta 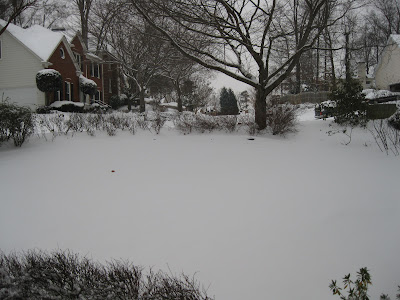 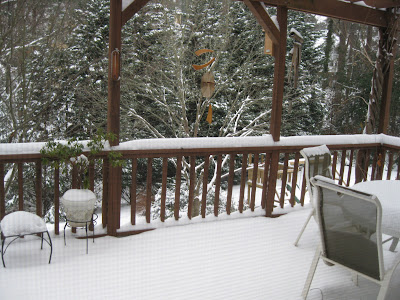 Four inches at least.
According to the news, the ice is next. Lots of knitting time ahead!
Posted by knittergran at 9:28 AM 3 comments: 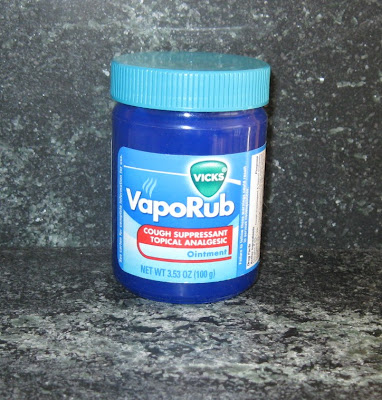 When I was growing up, my family was first Catholic, and then Presbyterian. The one faith that remained constant, however, was the belief that Vicks could cure anything and everything. My husband's family believed in Pepto Bismol, and what that didn't cure, horse liniment could. To each his own.

But I have had ---I swear---a disease for about a week and I am.tired.of.it... I am not a patient person. So when I remembered a tip a friend had given me about Vicks, I thought about my family's faith in it, and decided that I had nothing to lose. Here's how it goes:

Spread Vicks all over the soles of the feet. Cover with cotton socks. Go to bed.

Thursday and Friday nights, that's what I did. I am no better. Perhaps the method relies on the placebo effect and I am just not a strong enough believer.

I do have very soft skin, though.
Posted by knittergran at 10:25 AM 1 comment:

Email ThisBlogThis!Share to TwitterShare to FacebookShare to Pinterest
Labels: Vicks 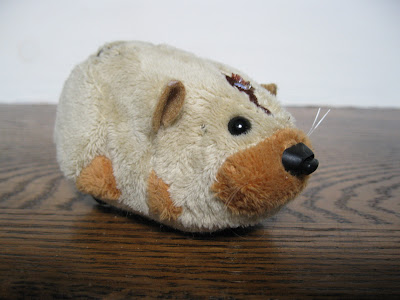 Two of my grandchildren received these cute little hamsters for Christmas. I had never seen them before, and I thought: Wouldn't Baxter LOVE one of these?!"

So today, off I went to Target and I bought one. I couldn't remember what they are called and asked a salesperson for the little fake hamsters that move and make noise.

She asked: For a boy or a girl?

For my spayed kitten, I replied.

Back at home, I put it on the floor, turned it on and waited for Baxter to attack it.

Baxter ran, really, really fast. Into another room. He peeked out and kept an eye on it but would not get near it until it stopped.

Then he tossed it down the stairs to the basement.

I figured that this meant he now L.O.V.E.D. it and turned it back on.

Posted by knittergran at 2:00 PM 2 comments:

What I Will Take to My Grave 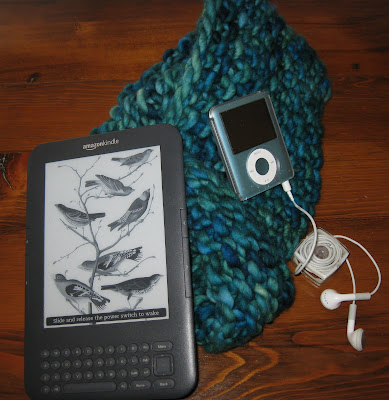 I will take my knitting. It's more than one thing, especially when I consider my stash, but I consider it a category, so it's one thing.

My Ipod, because who can live (although, now that I think about it, that's kind of irrelevant)without music?

And my Kindle. I love, love, love my Kindle. Since it arrived for my birthday in September, I've read twenty-four books!!! And even though I consider myself a capital R Reader, that is a lot of books in a few months. I've read new (old) authors: P.G. Wodehouse; Sir Arthur Conan Doyle (but I always figure out his Sherlock Holmes mysteries before the end/no fun there); Agatha Christie ( I NEVER figure out who done it before the end, either with Miss Marple or Hercule Poirot); PD James; Anne Perry (who, along with a friend, killed the friend's mother by beating her to death with rocks, for no apparent reason. She did some time somewhere, and is now on the loose, writing murder mysteries [write what you know?]); Charles Todd (who, even though the books are published as his, collaborates with his mother in writing them); and Alexander McCall Smith.
And new (new) authors: Emma Donoghue (Room: A Novel....ick. I never like children-in-peril stories); Henning Mankell (Wallander); Scott Spencer (Man in the Woods---liked it; kept thinking about it after I read it); and Timothy Egan (The Big Burn---about the establishment of the National Forest system. Surprise, surprise. The people in power at the time---no, not the government, the magnates, oil, rail, lumber, land--- wanted the land to remain free so they could grab it. The government managed to set aside millions of acres for the park system. Can you imagine the businesses that would have sprung up along the rim of the Grand Canyon? Dew Drop Inn perhaps?); John Grisham (The Confession); and Chris Cleave (Little Bee: A Novel).
I admit that a part of the appeal of the Kindle is the immediate-gratification factor. I hear someone recommend a book or an author, and it's MINE!!! Just that fast. It's also easy to carry, so it goes everywhere with me, in my purse.
I did consider my that I should take my iPhone, but really, who would want to hear from me, and what would I say anyway?
What have you been doing?
Me? says I, oh, nothing much....reading, knitting, listening to my music....I could use a light though...
OK---four things.
Posted by knittergran at 3:00 PM 2 comments: