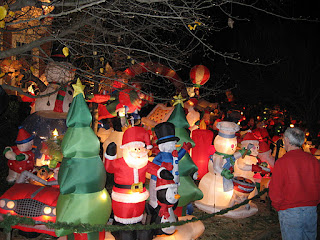 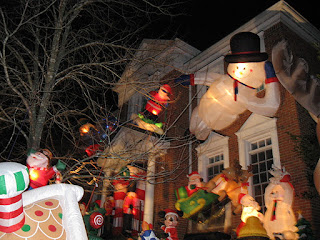 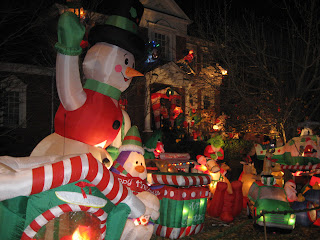 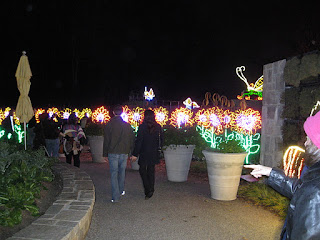 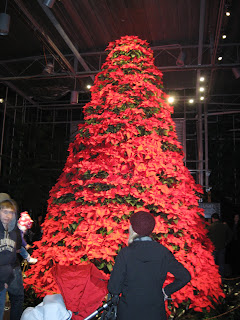 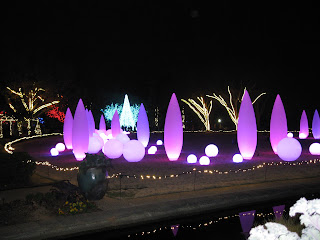 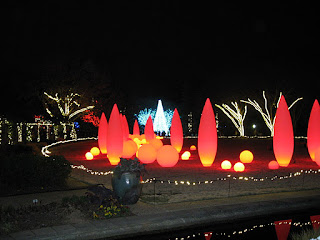 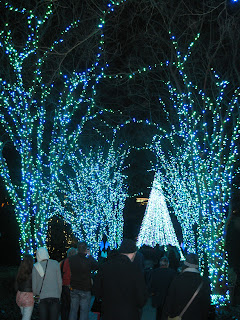 Blogger has just changed the format for writing and for putting pictures in a blog and I can't figure it out, hence the title.  Now my blog is upside down, sort of.  What I intended to do was show---first---some sights from the light show at Atlanta Botanical Gardens (really, really pretty and a nice thing to go see on a not-freezing evening) and then I wanted to add some photos of a house in the Atlanta area that has gone...I'm not sure where...in terms of decorating.  It was fun to walk around and see all the inflatables.  There was also a table with addressed envelopes for an Atlanta-area charity---nice touch.

If you are in the Atlanta area over Christmas, go see the lights at Atlanta Botanical, and don't miss the most amazing lights EVER in the conservatory.  Magic, I tell you.  Magic!
Posted by knittergran at 11:24 AM 2 comments:

Gather these ingredients (but if you can find something other than butter-flavored pretzels-yuk-buy them instead): 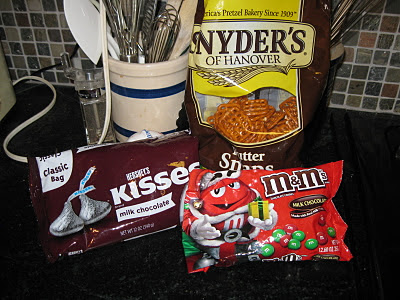 Thanks to fellow knitters Sally and Deanna, I have learned how to make some very yummy candies and here is the recipe:

Preheat the oven to 200 degrees. Place a kiss on each pretzel. Some kisses aren't perfectly shaped; eat those. Put the tray in the oven for four minutes. Take it out and squish one m and m (lettered side down) on each kiss. Let them cool (or not) before you eat them. 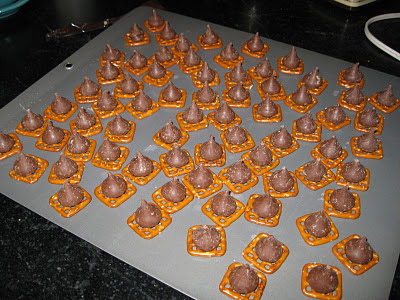 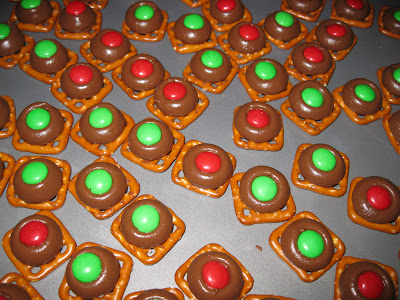 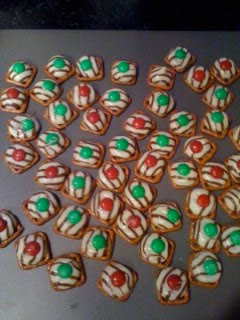 A Better Picture of Fetching 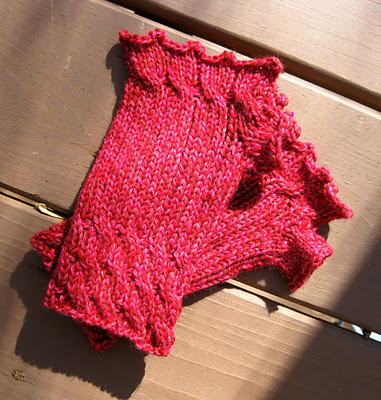 Posted by knittergran at 1:13 PM No comments: 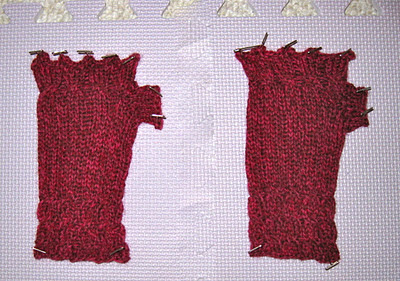 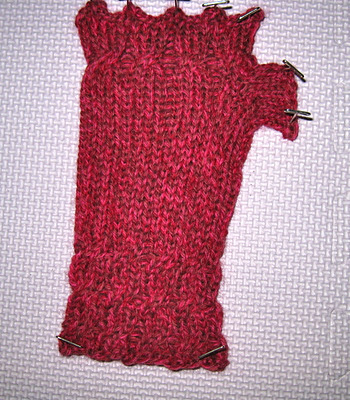 Not in the sense that something is more fetching than something else.

In the sense that this is maybe the fifth or sixth pair of Fetching that I have made. These are either for me or for a gift---haven't decided yet. I kind of like them!
Posted by knittergran at 2:49 PM 1 comment: 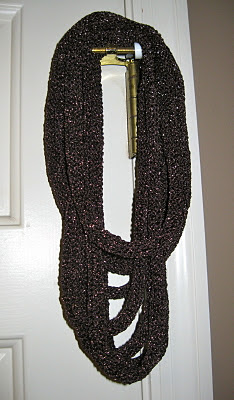 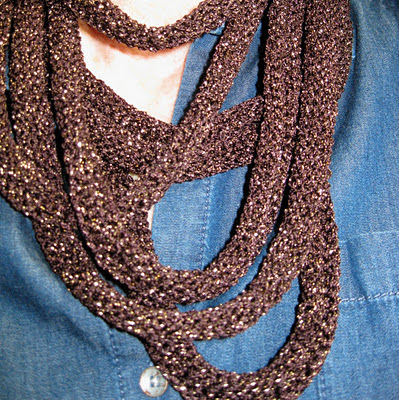 That's what my husband said when I showed him this completed Assemblage Seven Circle....scarf? necklace? I don't know either, but it was easy to knit. It's made from katia Gatsby yarn. It's not a natural fiber, unless viscose is a natural fiber. It also has nylon and polyester, neither of them knitters' favorite fibers.

But it's SHINY and SPARKLY and I do loves me some sparkle! (even if it's a bit scratchy)
Posted by knittergran at 5:12 PM 1 comment:

We Have A Christmas Tree!!! 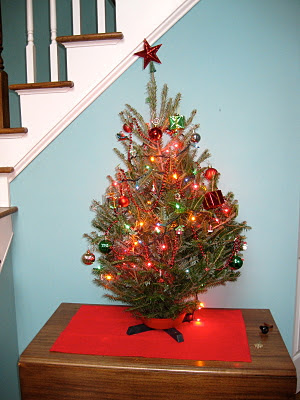 We haven't had one in years because we usually go to Austin for Christmas. When my older daughter had two children, she and her family came here. But now she has four and travelling with four at Christmas time is not something I would ask her to do. Someone is usually ill at some point over the holidays and four children, even my wonderful grandchildren, can FIGHT and ARGUE when confined too long in the car. I would hate to find out that my daughter and s-i-l had left one or more of them at a rest stop somewhere between here and Austin.

The second, and more important reason we didn't have a tree last year and almost didn't this year is BAXTER.

But I came across this table top tree when I was out today and couldn't resist. It was only $19.99, including the stand, but it became a bit more expensive after I bought ornaments that won't break my heart if Baxter gets/destroys them.

So far, his only interest is in drinking the water in the stand. I'm not counting on that to last.

(Oh, if anyone is looking for another of these really fancy tree skirts, you can find one in the kitchen towel section of Target. No expense spared here.)
Posted by knittergran at 4:53 PM 6 comments: 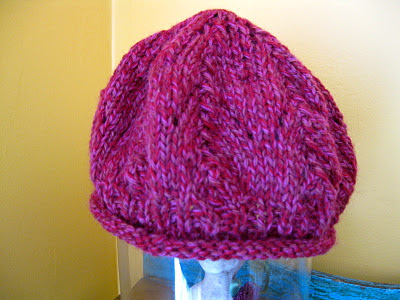 This is the last hat I am making, at least for now, from the same yarn (Cascade Quatro, color #9433) and the same pattern(Meret-free on Ravelry). I cannot get the color to look like the actual color, no matter how much I play with it in iPhoto. And the lace doesn't show up well. I'm an amateur photographer, in case you couldn't tell.
The pattern is so easy that it's ideal for someone who wants to learn lace knitting. And it is SO easy that after the first couple of rows, I didn't need to look at the pattern any more.
But after five of these, plus one hat without lace for my grandson, enough is enough. Time to move on.
Posted by knittergran at 3:41 PM No comments:

Late to the Party 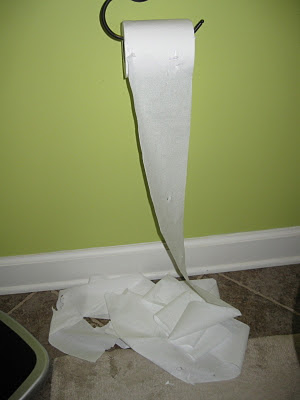 That's Baxter! He was supposed to have discovered the joys of playing with toilet paper (bathroom tissue, for the more refined) at least a year ago. But to my relief, he didn't.

Well, now at a little over a year and a half old, he has discovered it.

* Swearword created by older daughter when she used a word she heard her father use when he discovered he had a flat tire. He told her she couldn't say that, and she asked if she could say "swerts." He said---sure! 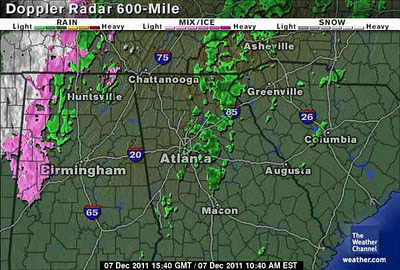 Well, it is December, but my roses are still blooming.
Posted by knittergran at 10:53 AM No comments: 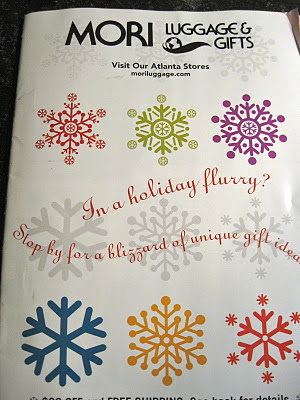 But just who would consider this device.... this thing.... a gift? 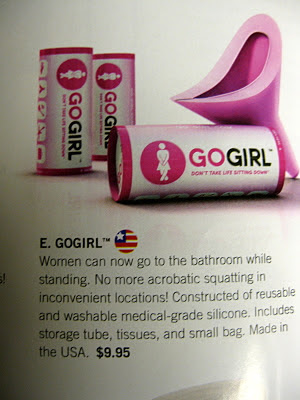 I didn't know such a thing existed. I'm sure there are uses for it somewhere.
But a Christmas gift?
No thanks.
Posted by knittergran at 7:04 PM 1 comment:

He wants to wear Lily's leg-warmers 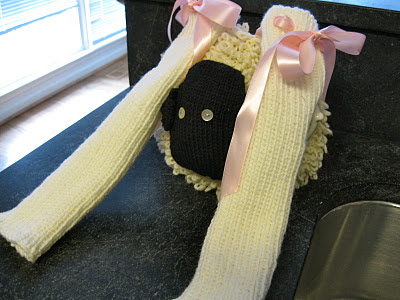 but he has no legs.
Posted by knittergran at 3:35 PM 2 comments:

This is my daughter. She took this photo with her iPhone (or a friend did) and used the app called Aging Booth to see what she would look like when she is older. 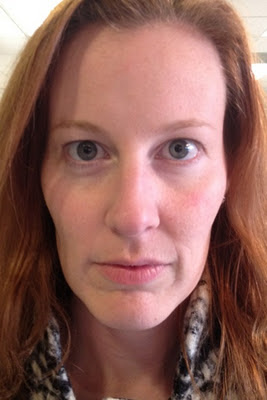 She said she was supposed to look bad in her "before" picture, and really, she is pretty.

But this is what she is supposed to look like when she is older---I don't know how much older, but I think I will not download this app. 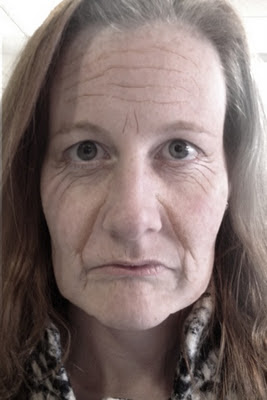