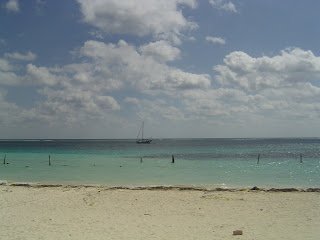 A week ago today I left the warmth of the Yucatan in Mexico. This is the third year that I have gone with friends to various places in Mexico: the first trip was to Sayulita, a small fishing village north of Puerto Vallarta on the Pacific; the second was to San Miguel de Allende, a centuries-old city in the high desert in the center of the country; and this year we went to Puerto Morelos, a tiny fishing village between Cancun and Playa del Carmen on the Caribbean. 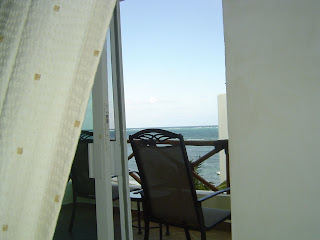 SO, first things first. The top picture is the beach in front of our house; the second picture is the view from my BED!!! I fell asleep every night watching the white foam from the waves breaking on the beach. I awoke every morning to the soft sounds of the waves washing up onto the beach. It was a wonderfully relaxing vacation.
But Cancun and Playa del Carmen are so Americanized, Canadianized, and Europeanized that they are cities I have no interest in visiting. The beachfronts are lined with wall-to-wall, enormous, gaudy resorts, condos, and hotels. Instead of staying there, we rented a house on the beach just north of the town of Puerto Morelos. It was quiet and sort of remote, but I suspect, based on the construction already begun, that in under five years it too will be overbuilt and overrun by tourists from all over the world. That's just fine; I understand. I am, after all, a tourist too. I know that resorts are perfectly nice places and they provide jobs for the locals, but I prefer being where I can see old Mexico, or at the very least, Mexican Mexico. San Miguel de Allende, by contrast, was wonderful, and I could go back there again and again. It's centuries old, very colonial, and we were able to rent a 400-year old house in the center of town. Amazing! 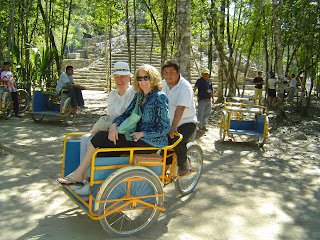 There was little to do in terms of sight-seeing in this part of the Yucatan. We did drive inland one day to a place called Coba, where there is a large site full of ruins from the Mayans. It was in what the locals call a jungle, but I guess it's technically a "dry" jungle. Our pedi-cab driver was a descendant of the Mayans and could speak Mayan as well as Spanish and some English. He took two of us on an hour tour of the many ruins. The third of us had been there thirty years ago and took the time to go bird-watching.

I considered climbing this, and then, after watching a youngish man struggle to get down the ruin, re-considered and just took pictures. It really was amazing to see these old, old structures, and picture the Mayans building and using them, and living in the jungle many centuries ago. Below is a typical Mayan residence built of sticks side by side for walls, and thatch for the roof. Usually, two or more of these were joined by walkways for a family's home. I suppose this is not original, but there were enough of them scattered around everywhere we drove once we were inland that I suspect that some people still build and use them. The poverty in Mexico is stunning, and so it's no surprise that people would still live in these. 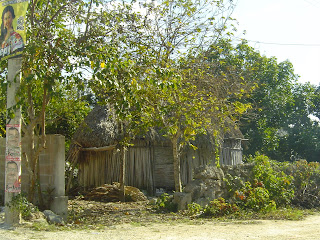 The Yucatan and the jungle are supposed to be filled with wild and potentially dangerous animals: jaguars, ocelots, monkeys, crocodiles, boa constrictors, and coatamundis. The coatamundi and crocodile are the only wild animals we saw, much to my dismay! I really wanted to see monkeys in the wild, and a jaguar would have been a treat (as long as I was in a car or a building).
Meet Mr. or Mrs. Coatamundi. He is wild, but he was near a hut where the staff sells snacks and water. I saw tourists tossing food to this guy, so that's why he was so accommodating about having his photo taken.
Anyhow, the trip to Mexico was wonderful. It is the first of the trips where it occurred to me that I was someplace WARM when it was COLD at home. During the past two trips I was so entertained by sight-seeing and doing other tourist things that I hadn't even considered what a really GREAT idea Mexico is in January!

Posted by knittergran at 5:48 PM

Looks fantastic! Glad you had such a great time!

I thought that beach looked familiar!

I stayed in an eco-resort near Playa del Carmen in 2005 - called Kailuum. It doesn't exist anymore, swallowed up by large resorts, sigh.

I climbed that pyramid at Coba, it was amazingly high and incredibly hot.